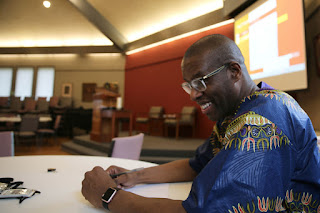 A UU congregation in Vancouver, Washington, hosted a class taught by David Campt (pictured above) about how white liberals can talk to racism skeptics about racial issues. It came about after Mr. Campt read the results of a poll that said that 55 percent of white people think that racism against white people is as big a problem as racism against people of color. Wow. So he thinks it might be a good idea for those white folk among us who believe there is a problem of racism in the U.S. to start having conversations with our fellow white folk (like relatives and friends) about this. This class is touring the country and here is a link to an article about it.
Posted by Wade at 11:26 AM