Thoughts on "That Ending" of Game of Thrones


SPOILER ALERT: The following contains many spoilers for the ending of the Game of Thrones series, events in the book, and random events in the series and the books. 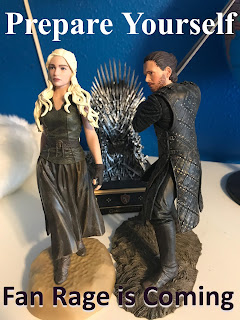 At the very least I think it would be safe to say that the ending of the Game of Thrones series was a bit controversial. Translation: a lot of fans of the show HATED it. My family has watched the series together (we even each had GoT t-shirts to wear on Sunday evenings) and we were split. My son was okay with it, I disliked it, and my wife absolutely hated it and swore never to read a George R. R. Martin book again or wear her "Mother of Dragons" t-shirt anymore.

Why did so many people have such visceral reactions to this? I spent a lot of my time watching 73 episodes over the years and so I figure I can spend a little time this Memorial Day weekend to write down some thoughts. (Maybe in a few years I will look back, read this over, and be shocked at how seriously and emotionally we handled this!)

It is one thing to not agree with the author on how a story should end. That happens a lot. But the intensity of the reaction to this GoT ending is extraordinary. For me I think it comes down to two things (1) expectations and (2) execution.

First, Expectations: For my wife and I, and I think this is true of many people including perhaps the actress who played Daenerys, we can safely say that for about 71.5 episodes we thought a particular story that we loved was being told and in the last 1.5 episodes we found out that the authors were telling us a very different story. A story we didn't like nearly so well.

We thought that Game of Thrones was this subversive, feminist, fantasy about a girl (Daenerys was 13 in the book when she was married to Drogo) who is abused by her brother and is sold as a bride to raise an army. She survives and learns to thrive and tempers the most violent instincts of her husband and his people and wins better treatment for women prisoners. Before and after her husband dies, she undergoes rape, slavery, humiliation but rises above it all to become a champion for slaves and women. She wishes to overturn the order of things, to "break the wheel," as she puts it and she becomes (to many GoT fans) a feminist icon - a strong woman who is out to overturn the violent and misogynistic rule of men. Because it is George R.R. Martin the story is not simple and there are evil Queens (like Cersei) and good men (like Jon) but still there is a marked contrast between the murderers and rapists like Ramsey, Euron, and Joffrey and women like Arya, Sansa, Yara, and Daenerys.

It seemed like Daenerys' "breaking of the wheel" was going along the lines of the great switch that occurred in real history when the right of the sovereign monarch changed to exclude the right to kill just anyone. In the real world, as summarized by Michel Foucault, in the first volume of his "History of Sexuality" after this switch:


[i]t was no longer considered that this power of the sovereign over his subjects could be excercised in an absolute and unconditional way, but only in cases where the sovereign's very existance was in jeopardy: a sort of right of rejoinder. If he were threatened by external enemies who sought to overthrow him or contest his rights, he could then legitimately wage war, and require his subjects to take part in the defense of the state; without "directly proposing their death," he was enpowered to "expose their life": in this sense he wielded an "indirect" power over them of life and death. But if someone dared to rise up against him and transgress his laws, then he could exercise a direct power over the offender's life: as punishment the latter would be put to death.

This seemed to be who Daenerys was for 71.5 episodes. Brutal to her enemies, internal by executing them, external by waging war. This was in opposition to kings like Joffrey and Ramsey who seemed to believe they had absolute power of life and death over their subjects (especially women). For 71.5 episodes you could see Daenerys, this rape and domestic violence survivor, however harsh and brutal to the enemies that threatened her survival or reign, as a champion of oppressed people, particularly slaves and women.

So it was a surprise, in the penultimate episode to find out that she had suddenly decided that she was a ruler like all the ones that had come before her: having the right to burn up innocent subjects for no reason on a whim.

Okay, maybe that is a little unfair. She had been stressed by lots of horrible losses in the previous two episodes, but the turn nonetheless seemed really abrupt. I know people say that the last season or so had pointed to Daenerys becoming a "mad Queen" in her father's footsteps, but I don't really see it. I could understand her being brutal to Cersei or even Tyrion as he betrayed her by releasing Jaime in order to try and help Cersei escape, but to burn up women and children? She had never done anything like that before, and it goes completely against what she has been doing for the previous 71.5 episodes.

So instead of a feminist fantasy, we get the icon we have followed for about a decade getting murdered by her boyfriend (the ultimate act of domestic violence?), and the guys (white male characters) have to take over the world again to make things right. Sigh.

Of course Martin and the show's writers are not obligated to give us the story we thought we were getting or even the story we want. This world and these characters belong to them and they can do with it all what they please. But we, as readers and viewers, are also not obligated to love the story they gave us regardless of how much we enjoyed the first 71.5 episodes. They give us their story and we either enjoy it or not, depending on a lot of factors.

I think the feminist message we thought the show was going to send became more important to us after November of 2016. That was the time the story of our country was shifted - we went through a time period where we had been hoping for an experienced strong woman leader to be elected in our own country, changing forever the tradition of male-dominated rule and assuring (due to the supreme court seat that was open) the rights of women to be legally equal to men for at least a generation, and instead ended up with an old white guy who bragged about sexually harassing women and promised to work hard to take away women's rights to the autonomy of their bodies. History bent.

But at least we could have a fantasy in which the strong woman came out on top and changed things, right? Not just the same old "Return of the King" story (not that I don't love Tolkien's "Return of the King" and the Arthur legends, but the point was that we had heard those stories plenty of times before). Well, no. Instead the strong woman leader turns suddenly into Morgan Le Fay type witch (and not the cool Marion Zimmer Bradly version) and the men must unite to kill her and take over again.

I don't imagine Martin or the show runners think of it that way, but that is the way it came across to many of us and it was a tough pill to swallow.

Second, Execution: Then there are the narrative problems. Even if you give them this new view of Daenerys there seem to be more than a few holes in the plot. The main one being the suddenness of Daenerys' turn - it just seemed to come out of nowhere. I know that many have been talking about her becoming more brutal, etc., but I don't remember a single scene prior to the turn where Daenerys slew innocent women and children for no gain whatsoever.

When they made the turn come, they seemed to want to take away any possible ambiguity and make her act as evil as they possibly could. If, for example, King's Landing didn't surrender and she ended up killing the innocents as part of the battle it would still be horrific but there would have been some argument for justification. It would have been the equivalent of Dresden or Hiroshima - a dark stain on history, but not a clear war crime. Or if she had ignored the surrender and gone after Cersei directly (which is what I hoped she was doing when her face changed in The Scene) - again not a great thing to do but understandable in the sense that she might feel the need to eliminate the competition and that Cersei would always be a danger to her and her people if left alive. But instead she just starts buring up women and children. And when Jon confronts her about it she seems to show no remorse or upset about having killed them - instead she seems to pretend that it was necessary that they be killed as if the city hadn't already surrendered or even just to prove to Cersei that she was willing to kill innocent people. It makes little sense to me.

Given what she had done, Jon killing her makes sense. She was clearly not the Daenerys we had been with for 71.5 episodes anymore and this new evil Daenerys needed to be eliminated. However, after she gets assassinated the plot gets wonky again. We are asked to believe that shortly after being in the streets cutting surrended soldiers throats for supporting Cersei against Daenerys, Grey Worm and the Unsullied find that Jon has stabbed Daenerys in the heart, killing her, and decide to put him in jail until his family can surround the city and negotiate his release. And then, when they do, Grey Worm brings Tyrion out as a prisoner, makes points of saying that Tyrion is not there to talk and that the Unsullied are in charge of the city and then proceeds to allow Tyrion a long speech in which he virtually chooses the next King of Westros and Grey Worm basically defers to them all. Even the "punishment" given to the Queen-slayer, Jon, is very little punishment at all and has no enforcement mechanism given the departure of the Unsullied. It seems clear at the end that the true plan is to allow Jon to go north and live free among the wildlings. It is all just very strange.

It feels like the weird twist at the end (Daenerys sudden turn, Grey Worm's suddent deferrence to his Queen's killers) are there just so the series can end with the characters being where they are supposed to end up (Daenerys dead, Jon in the North, Bran as King of Westros, and Sansa as Queen of the North) whether or not how they get there makes much sense.

Combining the seemingly contrived plot points with the loss of Daenerys gets you a whole lot of angry fans.

Ultimately I think it will be interesting to see if Martin's ending makes more sense than the shows (I have a feeling it will) but I also suspect that the "Daenerys dies ending" will still be there (but perhaps with better development) and it will be very sad.

Geez, this went on for a while. Well, if you are disappointed in this post, remember that at least you didn't have to wait a decade for it to end!