Most famous for his Booker prize-winning novel Lincoln in the Bardo, George Saunders has a large body of published fiction. After discovering him due to the Booker and reading and enjoying Lincoln this year, I decided to try out his earlier books of shorter fiction. I started with his first published collection (CivilWarLand in Bad Decline) and I came across a passage that is straight out of the ancient Gnostic textbook.

Spoiler alert for the story "The 400-Pound CEO." 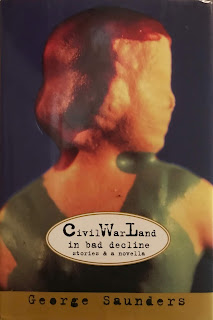 In the story "The 400-Pound CEO" the main character has gone through some tough times. By the end of the story life has gone from bad to worse and he is in prison as a result of killing a nasty fellow who was attacking a woman. Well, he also covered up the killing and took the man's possessions and place in the company they worked at, so there is that. In any case, the character ponders his fate at the stories conclusion and delivers these paragraphs:

Maybe the God we see, the God who calls the daily shots, is merely a subGod. Maybe there's a God above this subGod, who's busy for a few Godminutes with something else, and will be right back, and when he gets back will take the subGod by the ear and say, "Now look. Look at that fat man. What did he ever do to you? Wasn't he humble enough? Didn't he endure enough abuse for a thousand men? Weren't the simplest tasks hard? Didn't you sense him craving affection? Were you unaware that his days unraveled as one long bad dream?" And maybe as the subGod slinks away, the true God will sweep me up in his arms, saying: My sincere apologies, a mistake has been made. Accept a new birth, as token of my esteem.

And I will emerge again from between the legs of my mother, a slighter and more beautiful baby, destined for a different life, in which I am masterful, sleek as a deer, a winner.

This passage is about as Gnostic as it gets! Instead of the Gnostic term "Demiurge," Saunders uses "subGod" but the idea is essentially the same.

A difference, I believe, between what Saunders puts in the 400-pound CEO's head and the ancient Gnostic idea is that the Gnostics did not believe the "true god" will come and correct the mistakes of the subGod, but that it is everyone's responsibility to obtain the "gnosis" necessary for the person to reject the world the subGod has set up and find their way to the true God.

But this is in character for Saunders' 400-pound CEO who, throughout the story, is not one who sees himself as doing, so much as being done to. The scene is a fantasy for him. But one heavily influenced by Gnostic spirituality. Particularly telling is the paraphrasing of a standard Gnostic phrase "the God above God." I have no idea where Saunders got it from, but it seems clear that he encountered some Gnostic literature somewhere along the line.

(In a different story in the same collection Saunders also has a character ask people to "honor that part of the eternal that resides within them." Another seeming reference to Gnostic spirituality.)