A while ago I posted about a George Saunders story that seemed quite Gnostic to me in his collection "CivilWarLand in bad decline." Shortly after that I read another Saunders short story collection that contained a story much more blatantly Gnostic: both the story and the book collection containing the story are called "In Persuasion Nation." 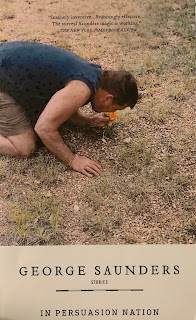 I am not going to give anything about the story away to spoil it, but if you have any interest in the influence of Gnostic mythology and spirituality in the modern world it is well worth your time to track this one down. It is literally the funniest story I think I have ever read. I tired to read it out loud to my wife and son but I couldn't get through it very well because I couldn't keep myself from laughing while reading it - even knowing exactly what was coming.

What makes it particularly engaging for people interested in Gnosticism is that it uses elements of gnostic mythology in a clear way but also parodies certain aspects of modern life using gnostic frameworks that can be applied without knowing anything about ancient (or modern) Gnostic thought.

In addition the book contains several other hilarious stories filled with Saunders' strange dark humor ("I CAN SPEAK!TM" is another favorite of mine). Buy the book. Read it. You won't be disappointed.