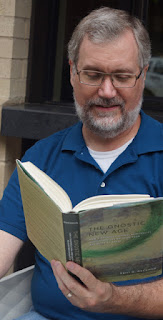 Wade Greiner is an attorney living in Houston Texas with his wife, son, and two Westies.  He is also a Gnostic UU.

UU stands for Unitarian-Universalist.  Unitarian-Universalism is a religion of folks who have a large array of diverse religious beliefs.  Some are Christian, some are atheist, some are Buddhist, some are Muslim, and the list could go on forever.  Oh, and some are Gnostic.  What is expected of a UU practitioner includes, among other things, that they support each other in each person's individual spiritual path.  There are principles that UU congregations affirm to promote and a list of sources from which UUs draw their principles.  The principles we are called upon to affirm and promote are:


The sources we draw from are:


Those principles and much more about UU can be found at the website for the Unitarian-Universalist Association.

The Gnostic portion is a reference to a book by my wife, Rice University Religion scholar, Professor April DeConick.  In her book The Gnostic New Age: How a Countercultural Spirituality Revolutionized Religion from Antiquity to Today she introduces her idea of Gnosticism as a type of spirituality that is characterized by five attributes that can be present in varying amounts depending on the tradition of the particular Gnostic.  I am paraphrasing the characteristics here, based on April's book.  They are:

Many of the characteristics of Gnostic Spirituality is reflected in the principles and sources affirmed by UUism.  For example: Gnostic Spirituality is characterized by experiential knowledge (gnosis) of a transcendent god, whereas one source affirmed by UUs for their principles is "Direct experience of that transcending mystery and wonder..."  Many such comparisons can be made and will be made in the random musings of this blog.